The Autograph Legacy of a Society Hostess 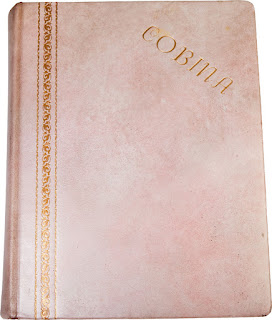 Guest books can be a treasure trove for the autograph enthusiast—especially if the guest book belongs to someone famous in their own right. I’ve recently acquired for my personal collection a guest book used by Cobina Wright (1887–1970), an American opera singer and actress who later became a syndicated gossip columnist. She was quite famous as a society hostess, and her guest book that covers the years 1950-1967 contains hundreds of pages of autographs of A-list celebrity guests. It’s no wonder she had so much inside “intel” to fill her society columns—she was a true insider in the celebrity worlds of her day: Hollywood, Broadway, politics, high society, music, and art. It’s clear in studying this book that all of these worlds were inextricably linked, and it is utterly fascinating to see who was hobnobbing with whom! In alphabetical order, a sampling of the luminaries include:

The book itself is a beautiful object—an oversized volume bound in mauve-colored leather and embossed in gold-ink on the front cover “Cobina.” Her guest book takes one into the private celebrity world behind the veil. By looking at the personal sentiments, funny drawings, and “in-jokes” the reader gains a sense of the relationships and humanity beyond the celluloid and print artifacts we usually get to see.

On February 16, 1963 George Hamilton jokes, “hope you don’t mind going out with an old man!” At the time he was 24 and had just played the playwright Moss Hart in the film Act One. Wright was 76.

John Wayne displays his sense of humor in his 1953 entry, “We’re flat on our backs / Our room rent is due / But never mind about us dear / Happy Birthday to you”.

Art Linkletter playfully flirts, “once again My heart trembles as I meet Cobina—‘the other woman’”. He signs as “Art Linklet- ter + wife” while years earlier he had written: “Art Linkletter (a man you spent the night with) over the Atlantic—remember -”.

Not to be outdone in affection, Phyllis Diller signs on Bob Hope’s birthday in 1967 with a self portrait and hearts, “the other half of the Screen Team says Cobina is a silly broad who is lovely and adorable...I love you Cobina...meet my darling Warde Donovan”. This was Diller’s blockbuster year starring in Eight On the Lam with Bob Hope, the animated special Mad Monster Party, and her own Phyllis Diller Show.
It’s a shame most of us don’t use guest books anymore. It’s an invaluable tool for subsequent generations to be able to peek into another time—and another world.

For more information on Cobina Wright, pick up a copy of her memoir I Never Grew Up (Prentice-Hall, 1952).

article by Kevin Segall, published in Manuscripts Volume LXIV- Number 3 Summer 2012 (a publication of the Manuscript Society)
Posted by CollectorsShangri-La.com at 4:17 PM

Join our Newsletter for News, Contests, and Special Offers

CollectorsShangri-La.com
Our mission is to connect you with your passions through signed and rare books, music, movies, photographs, comics, toys, art, and other memorabilia. We believe that autographs and original memorabilia are a unique way that collectors can connect with their favorite actors, artists, writers, and other significant figures from our shared cultural heritage. Just as the residents of Shangri-La are immortal in James Hilton’s 1933 novel Lost Horizon, historical individuals can live forever through collectible artifacts. We hope that you discover a trove of treasures at CollectorsShangri-La.com! Authenticity Backed by a Lifetime Moneyback Guarantee! Registered Dealer of the UACC, Board Member of the Manuscript Society, member of the Ephemera Society of America and the National Cartoonist's Society.